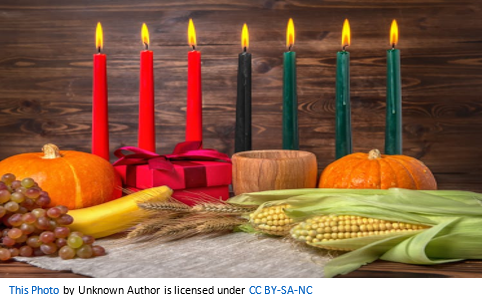 Kwanzaa – Just what is it?

Some ask the question, what is the religion that celebrates the holiday Kwanzaa? According to Dr. Maulana Karenga, “Kwanza is not a religious holiday, but a cultural one with an inherent spiritual quality.” And Karenga should know—he was the creator of the holiday. He developed this celebration in 1966, which makes the holiday less than 60 years old. Karenga, a black nationalist who worked his way through life to eventually become a college professor, sought a way to unite and empower the African American community on the heels of the Watts rebellion which took place in 1965 in the areas surrounding Los Angeles. The beauty of the holiday is the inherent spiritual quality can be celebrated by Africans of all faiths. (Non-black people are also welcome to enjoy Kwanzaa.)

Karenga modeled the holiday after the traditional celebrations in Africa following the first harvest and he took the name “Kwanzaa” from the Swahili phrase “matunda ya kwanza,” which means “first fruits.” (The extra “a” was added to accommodate seven children who participated in the first Kwanzaa celebration in 1966.)

The number seven is very significant in the unfolding process of the celebration, which is celebrated December 26th through January 1st (seven days).

Assembling the Kwanzaa display is one of the foundations of the ritual, which utilizes the seven core symbols:

Day 1. Mazao, or crops, represented by nuts, fruits and vegetables which are placed on display.

Day 2. Mkeka, or place mat which is used to hold the Mazao and symbolizes the historical and traditional foundation on which to build lives.

Day 3. Muhindi, or ear of corn, which stands for fertility and supports the idea that the future of families lies within the children. One for each child in the family is placed on the display.

Day 4. Mishumaa Saba, or seven candles are ceremonial objects that symbolically represent the power of the sun, thus providing light. There are three red candles, representing the struggle, one black, which is symbolic for people of African descent, and three green candles which color stands for the land and hope for the future. These same three colors are often used to decorate the home or dress of the families who participate in the holiday. 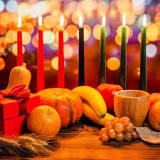 Day 5. Kinara is the name for the candle holder and represents the original ancestry of the African people. The seven candles are placed in the Kinara.

Day 6. Kikombe Cha Umoja, or The Unity Cup which is the center of the ritual performed on the sixth day of Kwanzaa. Each family member takes a drink to honor ancestors, and as a sign of unity.

Day 7. Zawadi are the gifts which are given on day seven, often handmade, to encourage growth, achievement, success, purpose and creativity. There is an alternative to the handmade gift requirement, which are items purchased to promote Black culture, from a Black-owned business, books, music, etc.

There are seven spiritual principles of Kwanzaa that are underscored during the holiday by daily expression through greetings in the Swahili language, which was chosen for its broad expression in the whole of African culture, rather than a specific national group. The phrase spoken is “Habari gani?” and the recipient of the greeting replies with one of the following words, depending on the day of Kwanzaa: