The Kidnapping of Bobby Greenlease 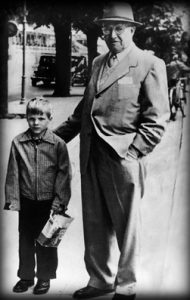 The first series of newspaper articles that captured my interest as a child chronicled the true crime drama of the kidnapping and murder of Bobby Greenlease.  Forty years later a writer hired me to trace their ancestry for a book he was writing.  I went through storage boxes to find old scrapbooks filled with yellowed newspaper articles about Bobby’s kidnapping.  Robert Cosgrove Greenlease, Jr. was born on February 3, 1947 in Kansas City, Missouri. His father, Robert Cosgrove Greenlease, Sr., described as a “multi-millionaire auto dealer” by new reports, married Virginia Pauline Pollock. Greenlease owned Cadillac and Oldsmobile dealerships in eight states and became one of General Motors’ largest stockholders.  His well-publicized wealth made his family a prime target for kidnappers.

On Monday, September 28, 1953, Bonnie Heady, 41, posing as Bobby’s aunt, told Sister Morand of Notre Dame de Sion Catholic Church in Kansas City, Missouri that the boy’s mother had suffered a heart attack.  Explaining that Virginia Greenlease wanted to see her son, Heady asked that he be released so she could take him to the hospital.  They left the school at 10:55 AM  by cab to meet up with Heady’s live-in, ex-con boyfriend, Carl Hall.

Hall drove them across the state line to the Moody Farm in Johnson County, Kansas. In an overgrown area Hall tried to asphyxiate the boy using a piece of clothesline, but he wasn’t strong enough and resorted to a 38 caliber hand gun. Firing at point-blank range, he missed the squirming child.  After hitting Bobby in the face with the revolver, Hall shot the boy in the head.  Bobby Greenlease was dead within an hour of leaving school.  Greenlease, Sr. paid Hall and Heady $600.000, the largest ransom paid by anyone in the United States.  After St. Louis police heard that Hall was in town and flashing wads of cash, they brought him in for questioning.  Hall confessed to the kidnapping and implicated Heady. Police arrested Bonnie at her home and located Bobby’s shallow grave in her yard.  Bobby’s remains were exhumed on Wednesday, October 7, 1953 and his kidnappers charge with federal crimes.

Justice came swiftly in those days.  Hall and Heady, thinking they would avoid the death penalty, pleaded guilty to murder.  On November 6, 1953 a federal jury convened to hear pleas and decide their punishment. Three days later jurors took only 8 minutes to deliver the death penalty for Hall.  It took two votes to decide the same penalty for Heady.  A few minutes after midnight on December 18, 1953, less than three months after killing Bobby Greenlease, they were put to death in the gas chamber in Jefferson City, Missouri.

Download the FBI investigative and interrogation files for this case at http://vault.fbi.gov/search?SearchableText=Greenlease.

The writer who hired me never published the book and has waived further interest.  Watch this blog for more about earlier generations of the Greenlease, Hall and Heady family trees.