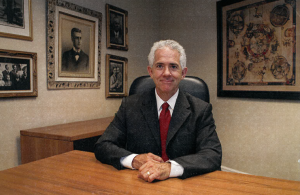 Richard Woodruff Price grew up in Phoenix, Arizona. At about the age of twelve, his Sunday school class focused on genealogy for several months. This got him interested so he collected photographs, histories and genealogy records from his father. He also went to his grandfather’s house, who had a file cabinet with many genealogy files included. His grandfather, James Robert (J.R.) Price, was at the time president of the Mesa Temple. J.R. took him frequently to his home in Mesa, and as he went to work in the temple, he introduced Richard to the women at the Mesa genealogical library. Those ladies helped him to collect genealogies and histories on his ancestors.

Occasionally he would visit his aunt and uncle in Salt Lake City and they shared much information about his maternal family.  He visited the Genealogical Library in Salt Lake City and began to copy family group sheets from the archive there. At age 16 his parents took him to Boston where he was able to visit the New England Historic and Genealogical Society to do research.  He found that both of his parents descended from the prominent New England colonist, Reverend John Lothropp. He also found he was descended from several Mayflower families, including Elder William Brewster, Stephen Hopkins, Thomas Prence, Thomas Rogers and several Fullers. 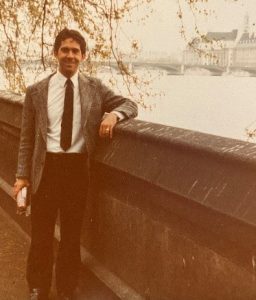 So, genealogy had become a hobby which he loved.  In his early twenties his parents took him to England and he spent a week visiting the Society of Genealogists and several county record offices.  When he started school at BYU, he took a genealogy class his first semester.  The professor told him not to major in genealogy because he could not make a living at it.  So, he graduated in psychology but took several genealogy classes while there.  When he graduated, he contacted a genealogy company because he heard they had been working on one of his ancestors.  He collected the research from them and they offered him a job.  He needed a summer job, hoping to start graduate school in the fall, and ended up working there at the Institute of Family Research (IFR) for several years. Richard became accredited by the Genealogical Society of Utah (now ICAPGEN) in English research.

He became director of research at IFR which at the time was the largest professional genealogical company in the world. While working there, Alex Haley contacted the company as he had just finished writing his book Roots. He told IFR he was going on the Tonight Show with Johnny Carson and wondered if they could compile a family history on Johnny Carson.  They only had a few days but the Family History Library understood the need and left it open 24 hours a day until the book was completed. Haley then presented the book to Johnny Carson and mentioned IFR on the show.  The company subsequently received over 25,000 letters requesting help with their genealogy! 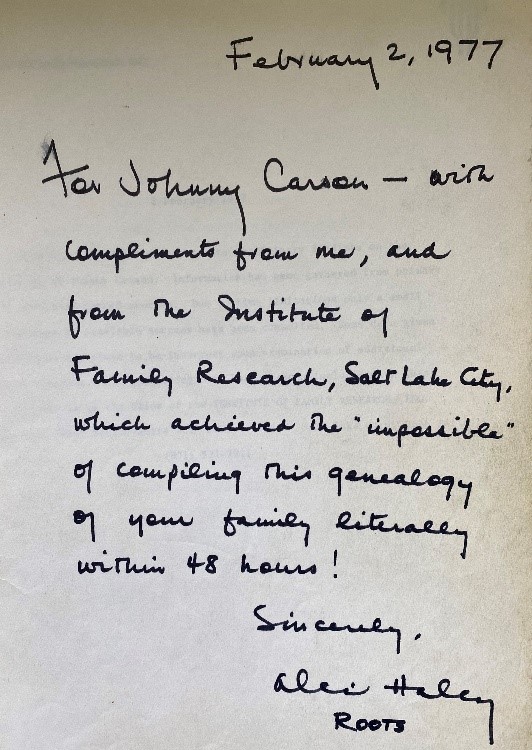 While working at IFR Richard became friends with Johni Cerny, someone who loved researching German and Jewish families, as well as African American and Native American ancestry. When

IFR’s business eventually declined, she started the company Lineages and was very successful. She initially dealt with Quincy Jones and other famous Americans. She later worked closely with Dr. Henry Louis Gates of the prominent TV show Finding Your Roots. In 2020 Ms. Cerny became ill and passed away.  Her heirs turned Lineages over to Richard Price and it has become a prosperous sister company to Price Genealogy. Lineages brought a special focus of African American research to Price Genealogy.

BYU started an MA program in Family and Local History as Richard launched his career. He was in the first class for that program.  His master’s thesis studied child-naming patterns in England 1558-1740. He finished the degree in 1987. From 1980 to 2000 he went to England, Scotland and Wales on research trips, spending six to eight weeks in the UK every 18 months. He worked in most county record offices, the Public Record Office and other archives in England and several in Scotland and Wales. He also visited Germany on a research trip

One of the most compulsive draws of family history is the drive to solve a puzzle…. to seek unknown origins of one’s ancestors. On one of Richard’s trips to England he visited the Somerset Record Office for his client Alice Creer Marsh, director of the James H. Moyle family 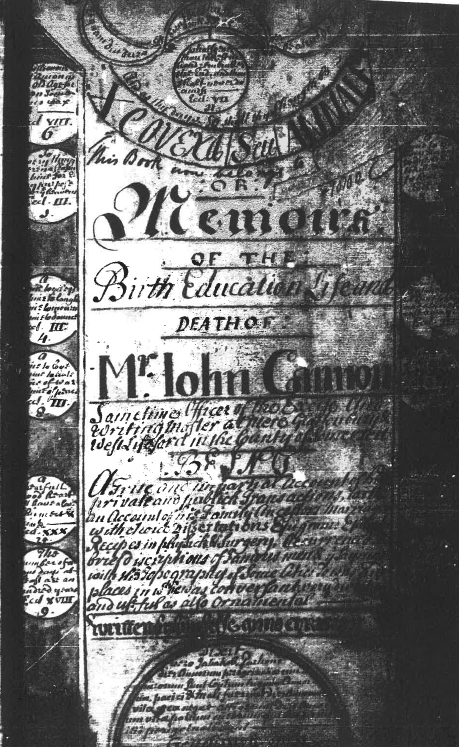 organization. The family had been stuck for decades on their ancestor Thomas Cannon who died in 1759 in Babcary parish.  The registers for Babcary did not begin until 1754. Additionally, the record office holding probate records for Somerset was bombed in World War II and virtually all Somerset wills were destroyed.  This left little hope of identifying Thomas Cannon’s ancestry.

While at the archive in Taunton, Somerset, Richard found reference to a book entitled John Cannon’s Memoir’s: 1684-1742. He ordered the book and when it arrived, he found it was an 800-page handwritten journal of the Reverend John Cannon, a minister of the gospel who was educated at Oxford University, where he received his doctor of divinity degree.  John Cannon was a resident of Babcary, the same village as the ancestral Thomas.

John Cannon also loved his family. He started with his great-grandparents, giving not only their names, birth, marriage and death information, but discussed their personalities, habits and life experiences. His grandfather “Thrived greatly and lived to have as t’was 23 children, most of wch died in their infancy.”

In reviewing John’s 20-page genealogy, including a self-portrait and hand-drawn family trees and group charts, it was determined that the client’s ancestor, Thomas Cannon, was the author’s second cousin. They had the same great-grandparents. John Cannon described Thomas’s grandfather thus: “Thomas Cannon was a very stout big man and few excelled him in strength. A butcher also had share of good education. But an infirmity hindered his pronunciation of speech, which was lisping.  And as he spake so would he write and spell and defend it strenuously by argument.

“He feared to travel by night, especially through churchyards and for company’s sake had given many a penny to our author when a boy to go with him from Lidford to King Weston. He married Joan Whorwood who had a brother killed by lightening. She like her sister-in-law before spoken of haught proud and a great dissembler, and a great talkative yet they lived loving together.”

The finding of this journal led us to extend Thomas Cannon’s ancestry back six generations to 1503 in various parishes of County Somerset. The first known Cannon ancestor was John Cannon, born about 1537 in county Kent. He and his wife migrated to Somerset as a young family.  The book was full of sermons and much local and family history which were important to the Rev. John Cannon.

Richard started his genealogical company in 1976, now known as Price Genealogy. He has trained dozens of researchers over the years and serviced thousands of clients, helping them to find their ancestry.  He published John Lothropp 1584-1653: A Puritan Biography & Genealogy. He and his company continue to service clients of all nationalities and ethnicities. They are especially interested in African American roots, along with research in North America and all of Europe. They have agents throughout the world who do research for clients.