This is a continuation of the blog published September 14, 2022, which was a biography of Richard Woodruff Price. Hereafter, is a brief history of the business started by Price in 1976. He has worked full-time at it from that date to the present. 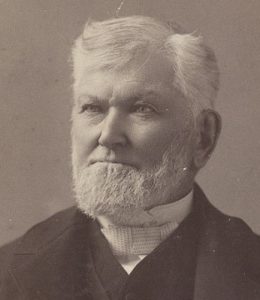 The previous article referred to Richard visiting his aunt and uncle in Salt Lake City to acquire his maternal family history.  Aunt Tony Daynes shared many years’ worth of collecting all she had done on the Daynes and Woodruff families. Richard’s great-grandfather was Wilford Woodruff. Wilford was president of the Church of Jesus Christ of Latter-day Saints in 1894 and had a great interest in tracing his ancestors.  In 1894 Wilford founded the Genealogical Society of Utah which eventually became the largest genealogical library in the world and is now called the Family History Library. This is where Richard and his colleagues have performed much of their research and now many of its records are available online at www.familysearch.org.

When Wilford established the Genealogical Society, he stated “We want the Latter-day Saints from this time to trace their genealogies as far as they can. This purpose directed much of the research which Richard undertook. As he began professional research, he always had an assistant by his side. David E. Rencher AG was his first co-worker and David spent six months living in London where many needed records were accessed. David has held important positions at the Family History Library including Director of the library which began in 2018, and he still holds that position. Daniel Poffenberger AG also worked closely with Richard for several years. Robyn Gygi, MA researched with Price for nearly 40 years.  She is an excellent English researcher and administrator, and was Director of Research at Price Genealogy until she recently retired.

Price Genealogy has focused on solving many ancestral puzzles. One of these is Richard’s great-great-grandmother Mary Virginia Marsteller. Mary and two of her sisters, Priscilla and Rebecca, appeared in Nauvoo, Illinois in 1845. Mary married Henry Samuel Alexander 12 October 1845 in Nauvoo. The following year they had a son Charles Marsteller Alexander. This young family began traveling west and Mary died in Council Bluffs, Iowa in 1847.  No history of her life, not even her parent’s names, were known.

In the 1970’s and 1980’s family members began working diligently on this family, hoping to find Mary’s parents (see the chart below). Charles Marsteller Alexander had several children. Descendants of five of these children became very interested in the Marsteller family. Richard Price and Carolyn Blake worked on it diligently.  Karen Webb had been working on the family for over 20 years, coordinating with Price and other researchers. She made contact with Curtis Mosteller of Texas who indexed all Marstellers in all available US censuses in the 19th century. She also communicated with Charles M. Marsteller II, shown on the chart as a descendant of Asa Marsteller.  It was believed that Asa was a brother to Mary Virginia. 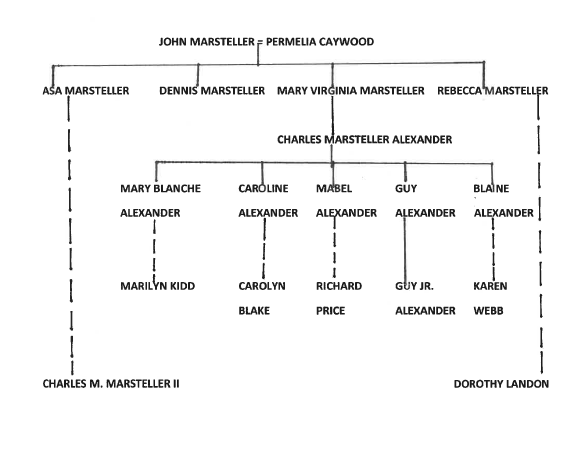 Carolyn Blake had a neighbor who was an avid genealogist and helped a great deal with research. One day as they were in the Family History Library a friend, Norman Moyes, introduced Price to Marilyn Kidd. Marilyn was a descendant of Mary Blanche Alexander, another child of Charles Marsteller Alexander. Marilyn Kidd had spent over 20 years working on Mary Marsteller and her family, not knowing about her cousins who had been doing the same thing.  Information was shared. One day Kidd, Blake, Price and Ferrin Lindsey were sitting at a table in the Family History Library talking a bit too loud.  A woman named Dorothy Landon came and asked them to be quiet. As she did so, she heard them talking about the Marstellers.  She was shocked, as she had come from Washington to work on her Marsteller ancestry.  Her ancestress was Rebecca Marsteller, one of the sisters who had come to Nauvoo with Mary. She knew nothing about Mary but she was told they were sisters.

Cousin Guy Alexander was a motivator.  He prodded the family to work hard on the problem. So, seven cousins were working off and on to find Mary’s parents.  Here are some of the significant things which were uncovered: 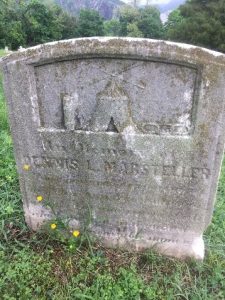 *In 1950 Mabel Alexander (granddaughter of Mary V.) and her husband J.R. Price were in Harper’s Ferry, W.V.  He was a mission president dedicating a grave.  As they walked through the cemetery, they came across the gravestone of Dennis Marsteller. They felt strongly that Dennis was a close relative of Mary Virginia; perhaps her father. They died without knowing the connection. In 1984 Price visited Harper’s Ferry and found Dennis’s gravestone. Underneath Dennis’s name on the stone was a poem, but it was buried deep in 130 years’ worth of pine needles. So, Price started digging around the stone and finally pulled it out of the ground.  There were four lines of poetry and underneath that was Dennis’s birth date and death date.  This information strongly suggested that Dennis was Mary’s brother, not her father.

*Lindsey worked diligently on the Marstellers.  He was a realtor by occupation but could not keep himself away from the library. After long searches, he decided to go up to the fourth floor for some new records. As the elevator door opened, everyone got on. Ferrin’s feet could not move.  The people in the elevator asked if he was coming and he said “I guess not”.  Then he had the thought to search family histories, looking for the Caywood name.  It was known that the Caywoods and Marstellers lived near each other and had many interactions. He found a Caywood family history. As he plodded through the book, he found Stephen Caywood. Stephen had a large family, including Rebecca, Virginia, Asa, Mary who married John Marsteller or Mosteller, and Permelia who married “Marsteller”. This book connected the Marsteller’s with the Caywood’s.

*A land record was found for John Marsteller and his wife Mildred. As research continued, no other reference could be found to a Mildred in the family.  It was quite a puzzle. As Lindsey found this book stating Permelia Caywood married Mr. Marsteller, he reflected on it.  He thought of the scene when they were buying the land. John Marsteller likely told the clerk that his wife’s name was Milly. So, the clerk wrote down Mildred, assuming that was Milly’s name. But as the name Permelia was pondered it was determined that John’s wife was actually Permelia.  Her nickname was Milly, but her name was actually Permelia, rather than Mildred as recorded in the deed. This assisted in putting together Permelia Caywood with John Marsteller.

As this progress was made, it was concluded that some of Mary Marsteller’s siblings were Asa, Dennis, Rebecca, and several others.  Their parents were John Marsteller and Permelia (not Mildred!) Caywood. Once this had been determined, the Caywood ancestry was traced back many generations into Yorkshire, England and the Marstellers extended to Darmstadt, Hessen, Germany in 1662. Hence, with diligent research, coordinating efforts with others, wise analysis and conclusions drawn, this Marsteller problem was solved.  Your ancestral puzzles can be resolved as well. Price Genealogy would love to assist you in compiling your family tree.

As Price Genealogy began to grow in the 1980s, Andrea Osinchak (now Bartley) helped support clients, organize the office, and manage clerical work.  The business flourished with her enthusiasm. With the hope of acquiring more business, firesides were held in client’s homes where they invited friends to hear encouraging success stories about family history. Richard’s parents, Bob and Dorothy Price started with their friends in Phoenix, Arizona. Bob’s cousin John & Linda Alexander held firesides in their southern California home, inviting friends there. Sid and Mary Foulger, and their son Clayton, of Potomac, Maryland had similar gatherings, drawing many prominent residents of the D.C. area, including Sterling Colton, Frank & Connie Madsen, Stephen, Dick, Bill, Donna and Judy Marriott, Amy Barker, Bo Manly, and many others. Dale Z. Kirby of Salem, Oregon has been a client for over 40 years! Two years ago we acquired Lineages and now have  the honor of working with new wonderful clients. We are grateful to all of these individuals who have sought assistance in finding their forefathers. Let us help you find yours!