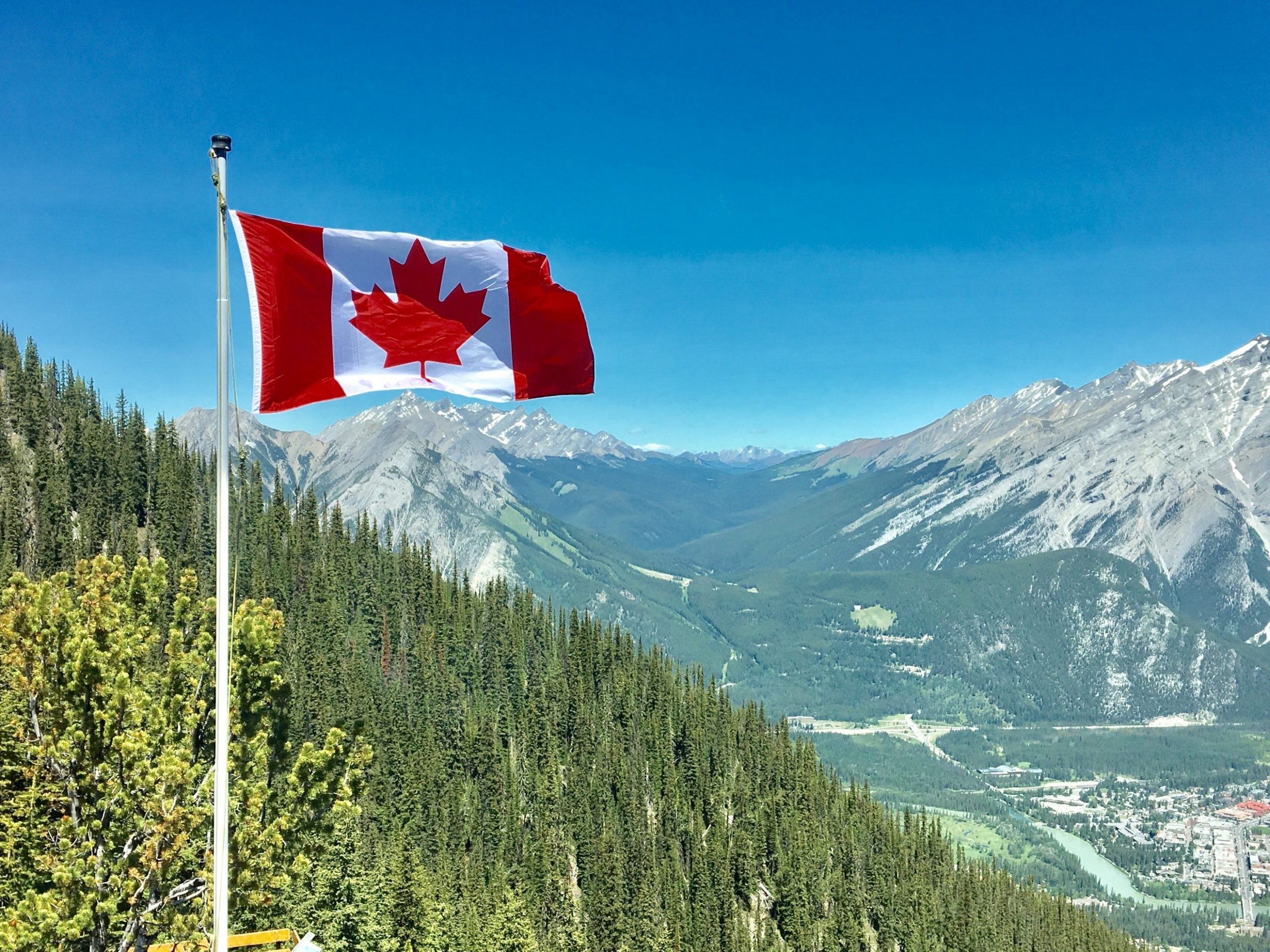 This post covers two topics: how to locate church records for your non-Catholic ancestors and how to understand the history of jurisdictional changes in present day Québec before the creation of Canada in 1867.

Since Québec was overwhelmingly Catholic, you may be concerned about finding church records for your non-Catholic ancestor. Do not forget that Québec, Canada, Vital and Church Records, 1621-1968 contains some non-Catholic records. If you want to learn about that database, refer to part one of this series on French-Canadian research. This post focuses on how to use a collection on FamilySearch, Canada, Quebec Non-Catholic Parish Registers, 1763-1967,  that may help you locate church records for your ancestor. Some of these records are in English and some are in French.

The non-Catholic parish register collection contains records for 38 denominations which can be grouped into more 12 more general categories shown by the graph below. 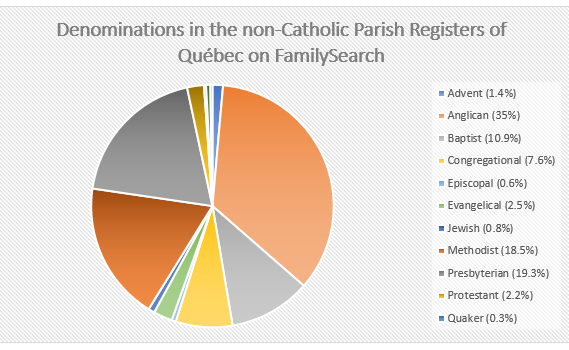 This collection has not been indexed, so you must use the browse function.

Here is an example of determining denomination from a census record and then finding a church record.

I started with an Ancestry tree entry for a woman named Gladys Geddes. It had no sources attached, but provided the following information about Gladys:

With that information I found her family on the 1901 Canada Census living in St Malachie d’Ormstown, Chateaugauay, Quebec. The religion column for the Geddes family says “Ch of Eng” which is short for Church of England, the largest non-Catholic denomination in Quebec, according to the pie chart shown above. 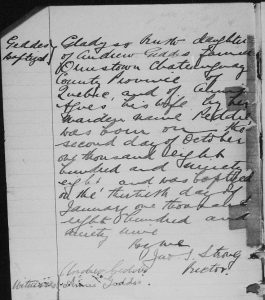 Now that I knew the Geddes’ denomination, I could search for a baptism record for Gladys. I did not find it in 1898, but I did find it in 1899. This record includes her parents’ names (including mother’s maiden name), birth date, and baptism date. The level of detail varies from denomination to denomination, but this demonstrates that non-Catholic church records can still be valuable to your research.

So, you know your ancestor lived in present-day Québec, Canada. However, the more difficult question is what the area was called during your ancestor’s lifetime. Québec went through many jurisdictional changes from the 1660s to 1867 that are summarized in the list below. You can read about these changes in more detail on FamilySearch’s Wiki.[ii] Understanding the correct jurisdictions helps you identify what jurisdictions you should search for your ancestor. Each template below contains the parish (ecclesiastical jurisdiction) and town (secular jurisdiction) because you should record each to help you in future research. For example, this is a valuable habit for towns that had more than one parish.

1660s-1763: The area was referred to interchangeably as Canada or New France and included three districts: Québec, Trois-Rivières, and Montréal. You can use this template to correctly indicate the jurisdiction your ancestor lived in: [parish], [town], [district], New France or Canada.

1763: The Treaty of Paris, which ended the Seven Year’s War, giving the British Empire possession of New France and it became the British province of Québec. You can use this template to correctly indicate the jurisdiction your ancestor lived in: [parish], [town], Québec, British Colonial America.

1774-1783: The Québec Act formally designated the area as Québec and more strictly defined its boundaries. You can use this template to correctly indicate the jurisdiction your ancestor lived in: [parish], [town], Québec, British Colonial America.

1841-1867: Lower Canada was renamed Canada East. In combination with Canada West (Ontario), the whole area was referred to as the province of Canada. You can use this template to correctly indicate the jurisdiction your ancestor lived in: [parish], [town], Canada East, Canada, British Colonial America.

1867-present: Canada East was renamed Québec when it joined the Dominion of Canada created by the British Empire. You can use this template to correctly indicate the jurisdiction your ancestor lived in: [parish], [town], Québec, Canada.

This is the final post in a four-part series on French-Canadian genealogy research covers several tools that can assist you in seeking your ancestors.

Our professional genealogy researchers at Lineages are available to assist you with your French-Canadian research. We would love to verify or extend your Quebecois lines.