Obituaries come in several different forms. The most useful for genealogy are focused on the deceased and contain a lot of information about their life. Some obituaries are shorter, just mentioning the person’s death and providing notice about the funeral. Repeated death notices are common in larger newspapers during the probate process. The legal process involving the deceased’s property often requires public notice so that unknown debtors, lenders, and heirs can come forward. Public tragedies, such as fatal mining accidents, will appear in the newspaper. These will include a list of victims but will focus more on details of the event than those of the lives lost.

Why are obituaries useful to genealogy?

An obituary can lead to more effective searches for records about your ancestors.

Most obituaries include information about when and where the subject died. They also often contain details about their birth and marriage(s). Sometimes searches for vital records are ineffective without a specific date or place — a date and place that might be listed in an obituary.

Longer obituaries will also include details about the deceased’s life. These details could help you find new records, unknown family members, and emotional connections.

There might be information about towns your ancestor lived in, places they visited, where loved ones were visiting from, etc. Perhaps details about a previously unknown residence will lead to that census record you couldn’t find; maybe that census will list a child, spouse, birthplace, etc. that was also not yet known.

An obituary might detail your ancestor’s occupations. If you know what they did for work, you can search histories for more details about their day-to-day life. For example, you might see that the person was a silk-mill card cutter in industrial-era Rhode Island. A simple internet search would lead you to find that their work was programming the machines that wove and printed patterns in fabric. Perhaps this helps you feel a connection with your ancestor because of your own interest in engineering, fashion, or programming.

Finding an obituary for your ancestor could lead to finding new information about their thinking. What social groups they joined, how involved they were in the community, what their religious affiliation was, etc. might be listed in the obituary. If you know what church(es) your ancestor belonged to, you can search for records in that church’s collection. Some social groups, especially the organized and politically-focused, kept minutes that might mention your ancestor and give insight into how they thought about their world.

Arguably, the most useful genealogical details in obituaries are about relationships. Obituaries are often written by surviving family or by someone else who knew the deceased well. Therefore, information about siblings, spouse(s), parents, and children will come from the author knowing the relative personally, or having heard about the relative from the obituary’s subject. Perhaps you have been trying to identify an ancestor’s parents and have only been searching among official, government documents. One of these newspaper articles could hold the answer you need.

How do I find obituaries about my ancestors?

There will not be an obituary for everyone. Sometimes there were no survivors to submit one to the local newspaper. It might also be that the deceased’s family felt no need or desire to write one.

There are several factors that affect the chance of an obituary existing for an ancestor.

If the deceased was a public or prominent figure in their community, their death might be reported without need for a family submission. A newspaper is very likely to report the passing of someone like a politician, an influential business owner, or an immediate relative of one. For example, a city’s newspaper reported the death of their former mayor’s father who died in another state. 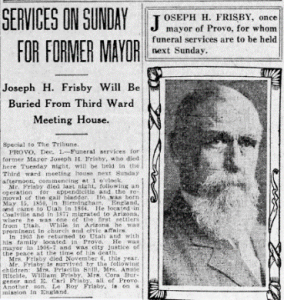 If your ancestor lived for a long time in a community, regardless of where they died, they might have an obituary published in that community. Smaller, local newspapers are more likely to regularly print long obituaries. If the deceased lived in a smaller town, a higher percentage of the population would be interested in a notice of their death than if the deceased resided in a big city. 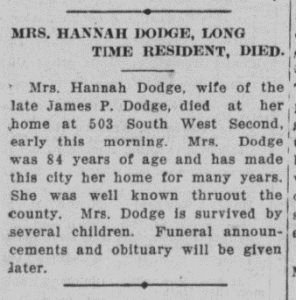 However, if the person died in an unusual or unnatural manner, a newspaper was more likely to broadcast the death. For example, a small-town farmer’s death was published in dozens of bigger newspapers because he was gored by bull, leaving behind a wife a several small children. Another kind of unusual death was one that inspire controversy or gossip. 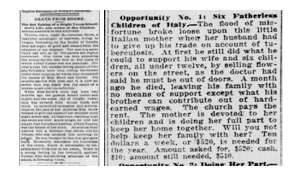 There are several, large, online databases.

Searching Ancestry will show results on Newspapers.com, but you will need a Newspapers.com subscription to view the results. It probably has the best search algorithm and widest coverage. Newspaper Archive is a similar website and also requires a subscription. The Library of Congress hosts a free newspaper database, but it is a difficult site to use.

If you have specific towns and/or counties to search, regional databases and collections will be very useful. Local newspapers will have differing availability. State universities often host historical newspapers. For example, the Utah Digital Newspapers collection is available courtesy of Utah State University.

Specific search terms and parameters will increase your chances of finding an ancestry’s obituary.

When would it be published? Death announcements and funeral notices will be printed within a few days of the subject’s death. A person might have an obituary published before and after their funeral, with the latter describing the memorial service. Notices published for probate might recur in newspapers for months after the person’s death.

It is always worth searching for an ancestor’s obituary. Some searches find nothing and some find short references with no new information. But often enough, there is the worthwhile obituary that is long, detailed, and overflowing with dates, events, and relationships.