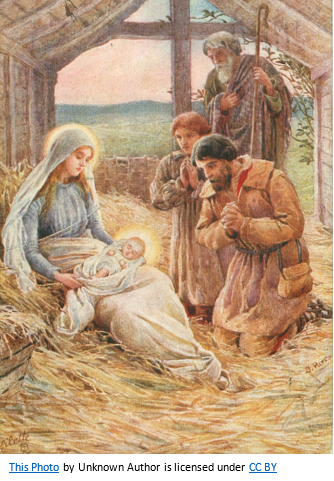 Christmas has a history about two thousand years long. It started as a religious holiday focusing on the birth of Jesus Christ. The holiday now has secular, commercial, and cultural significance as well.

It is celebrated worldwide, with each culture and country having different practices. Americans often decorate trees, hang lights, and exchange gifts. Germany has two traditional days in December; one day celebrating the Christ child and one day focusing on Saint Nicholas. In Mexico they decorate with poinsettias and there is a tradition of smashing a plate before making a wish. Japan’s KFC restaurants have special meals and waitlists for the many people who order. Families across the world have traditional foods, and sometimes generational recipes. These are usually similar by culture and country.

How do practices in the modern United States compare with those of the early eastern colonies and states?

Of the early American colonies, the northern settlements were created by religious separatists from England in the early 1600s. These pilgrims, like Oliver Cromwell in the 1640s, disavowed luxuries and thus did not celebrate Christmas like many contemporaries. This sect of Protestantism also considered meat pies to be too Catholic. Christmas decorations and festivities were illegal in Boston for over a decade and was punishable by a fine. However, the pilgrims refused work on Christmas day and would remain in their homes to show devotion for the religious holiday.

Southern colonies were less orthodox. Jamestown reportedly enjoyed Christmas festivities. They would have celebrated like contemporary England. There, the Christmas holiday was celebrated for two weeks and started with church attendance. People did not get much work done during those weeks, similar to Christmas vacation time now. They sang, played games, and feasted.

English customs became less popular after the American Revolution. Unfortunately, that included Christmas. It was almost a century later when Christmas became a federal holiday. Interestingly, it became official the same week that Thanksgiving did. How did Christmas become popular again?

How the Traditions Changed

Attitudes about family were changing in the 1800s. Parents gradually became less disciplined and more focused on the emotions of their children. Christmas was an opportunity to gift children with toys and attention without spoiling them. It became a holiday centered on family more than a carnival-like holiday.

Two works published in the early 1800s helped shape the focus and practices of Christmas. “The Sketchbook of Geoffrey Crayon, gent.” is a collection of essays and short stories published serially from 1819-1820 by American author Washington Irving. He described traditions and customs for Christmas that had not actually existed previously. What he wrote resembles our modern celebrations in festivity and charity. Irving emphasized celebrating Christmas across social and economic lines. “A Christmas Carol,” by Charles Dickens was published in 1843 and has been the basis of several movies. His short story focused on peace, kindness, generosity, and other values now associated with Christmas. The story’s popularity across generations shows how it shaped our modern Christmas holiday. 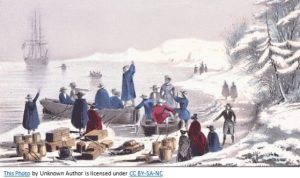 Colonial celebrations would have modelled contemporary English practices. Unfortunately, the first few Christmases in Jamestown and other colonies were difficult. They were starving and impoverished, the weather was terrible, their leader was captive, etc. Most families would have suffered a death while adjusting to the new environment. Colonists tried to celebrate the best they could and with the materials they had. After the colony was stable, winters would have been easier; it was probably then that Christmas felt merrier and more familiar to the English-born settlers.

Writer and satirist John Taylor described how Christmas was celebrated in 1631 in England. Like their homeland, Jamestown would have started with church attendance. Then:

“some went to cards, some sung Carrols, many mery songs, some to waste the long night would tell Winter-tales …. Then came maids with Wassell, jolly Wassell, cakes, white loafe and cheese, mince pies & other meat. These being gone, the jolly youths and plaine dealing Plow swaines being weary of cards fell to dancing to show mee some Gambols, some ventured the breaking of their shins to make me sport – some the scalding of their lippes to catch at apples tyed at the end of a stick having a lighted candle at the other – some shod the wild mare; some at hot cockles and the like.”

The same hot cider drink (known as wassail) is commonly made during Christmastime today. Settlers probably attempted to make a similar drink with what they had available. Hot drinks would have been comforting during winter, regardless of the holiday. 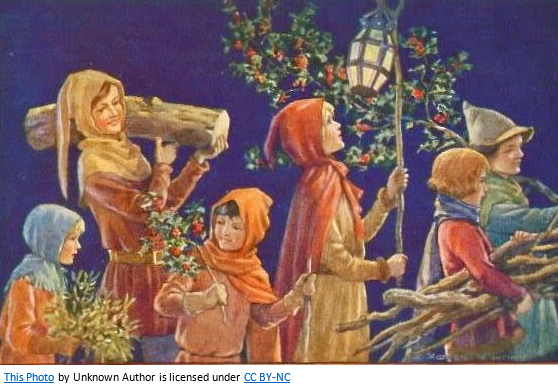 Feasting was popular, as it is now. Their meats were most likely venison, oysters, and fish instead of ham or turkey. As the colony stabilized, the amount and quality of food would have resembled the English festivity.

Jamestown settlers, like the English, decorated for Christmas in ways that would feel familiar today. There was holly and other greenery, and a Yule log in the fireplace. Colonists would have been able to celebrate this way even in the early years. Decorations would have become more lavish as their wealth increased.

They sang carols, lullabies, and other songs to each other, over food, and during games. Professional choirs were not used often; common people sang. This was a way everyone could celebrate and enjoy Christmas.

Colonists followed the tradition of exchanging gifts. Like England, they would have done it on New Year’s Day instead of Christmas Day. Even when unable to give presents to loved ones, the new year would have been a hopeful time.

There were many games that colonial Americans might have played. Some were as simple as parents giving children money. Others were more active. “Stool-ball” was similar to cricket and “hot-cockles” was like the modern elementary school game heads-up-seven-up. Leap frog still goes by the same name. “Snap-apple” was the game John Taylor described involving apples and candles.

When Christmas was revived in the 1800s, Americans questioned recent immigrants and churches that regularly celebrated Christmas. They began with the older European, Catholic, and Episcopalian (what the Anglican church became in America) traditions but those evolved over the next century. Eventually, unique American celebrations developed.

At Lineages we are happy to help connect you to your early American ancestors.