Family mysteries have often stood unresolved for generations. Until recently they remained a matter of endless family speculation. Traditional research sources have been increasingly available for proving a parent child relationship, but sometimes they cannot prove by themselves what really happened. Then DNA came along and everything changed. The following is a brief example of a research project that one of our researchers solved.

Family tradition held that Mamie Brown was the mother of Henry Roth. The 1930 Federal Census and Henry’s death record supported this assertion, but his birth record stated that his mother was Kathryn F. Koontz. Was Henry’s biological mother Mamie or Kathryn? A combination of DNA and documentation answered this question. 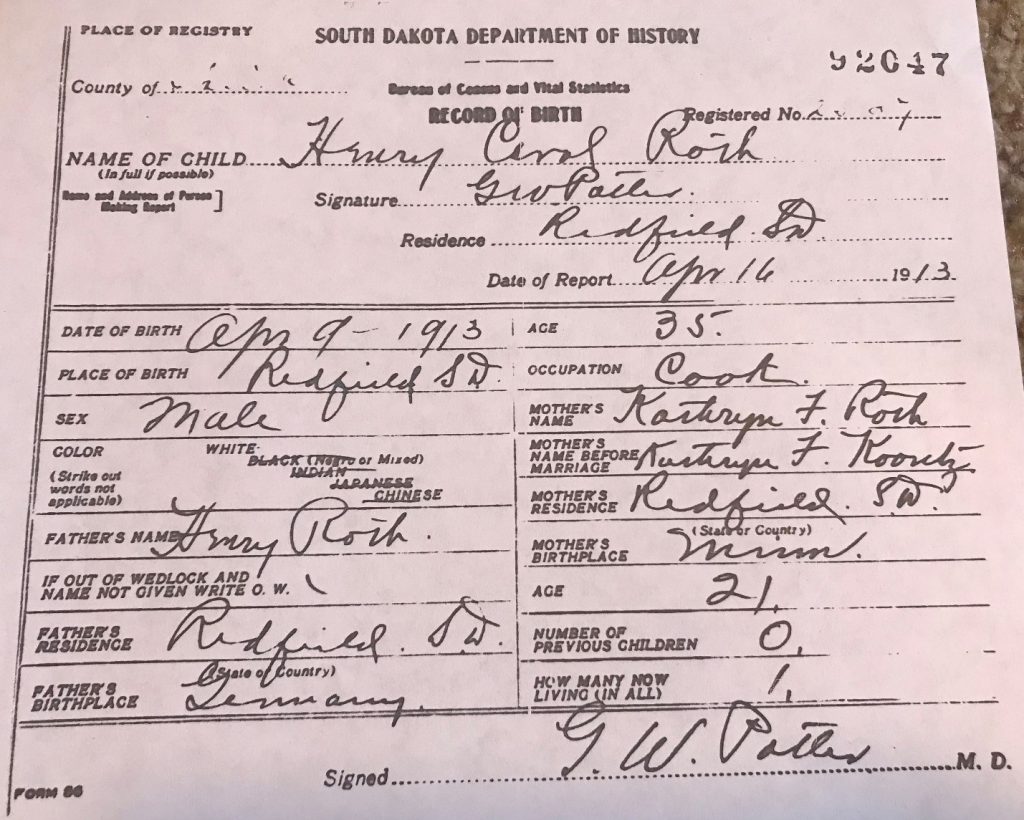 Traditional Research on the Brown Family

Research was conducted for Mamie Brown’s parents and siblings. This was necessary to determine how potential Brown matches were related to the DNA test taker, the granddaughter of Henry Roth.

According to the 1895 Minnesota State Census, Christian Brown and Mrs. Christian Brown [Caroline Larsen] were from Denmark and born about 1862 and 1860 respectively. However, Christian did not appear on the 1900 census with Caroline. That record indicated that they had been married for 17 years, which meant their marriage occurred around 1883. Since their two oldest children were born in Denmark, it could be assumed they were married there. Christian never appeared in another census with his family and Caroline was listed as divorced in the 1920 and 1930 censuses. It was likely that they separated sometime between the birth of Walter in 1890 and Caroline’s appearance as a single mother in the 1905 Minnesota State Census. Searches for Christian in the 1900 and 1910 censuses and Ramsey County probate records were conducted, but he was not located. Fortunately, Caroline’s life was easier to trace.

Caroline Larsen was born 6 May 1859 in Vor Frue Sogn, Odense Amt, Denmark to Peder Larsen and Anne Hansen. Caroline immigrated with her husband Christian to the United States sometime after the births of Hjalmar and Robert and before the 1890 birth of their son Walter. Though Caroline was not located in the 1910 census, she appeared in the 1920 census with Walter and the 1930 census with Mamie in St. Paul, Ramsey, Minnesota. Caroline died 18 May 1934 and was buried 21 May 1934 at the Atlanta Lutheran Church in Ulen, Clay, Minnesota. This record named her children as Elmer (Hjalmar), Robert, Walter, and Mamie, but did not list a spouse.

Christian Brown and Caroline Larsen were the parents of the following children:

Henry Roth’s granddaughter’s DNA test was used to find matches who are descended from the Browns’ other children. By confirming genetic connections to Mamie’s siblings, we can be confident that Mamie was Henry’s mother. Analysis revealed three matches connected to the Brown family. Traditional research revealed the proposed genealogical relationships between the matches and Henry’s granddaughter, as shown by the following chart. 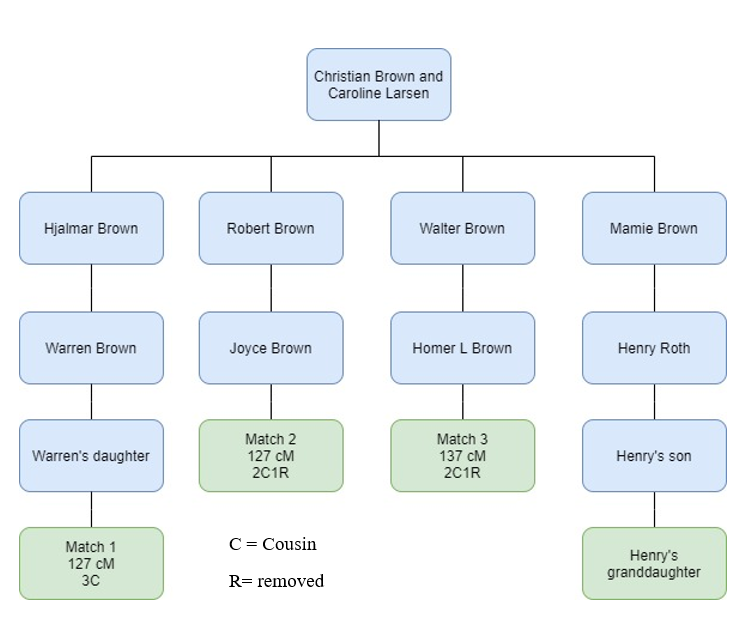 DNA is measured in centimorgans (cM) and for each relationship there is a range of expected centimorgans. As can be seen in the chart above, Matches 1, 2, and 3 are descendants of Mamie Brown’s brothers. The table below shows that the amount of shared centimorgans was within the expected range for each hypothesized genealogical relationship.

With these hypothesized relationships in mind, it was necessary to prove each match’s connection to the Brown couple with traditional research.

Match 1 Line of Descent: Match 1’s Ancestry tree identified their mother as private (living), but they identified their father as Robert Chambers Turner. A marriage record in California revealed Robert’s spouse. This spouse was baptized in the Lutheran Church and her baptismal record stated that her parents were Warren J and Verres Brown. Warren’s birth record stated that he was the son of Elmer and Huldah Sweet Brown. This relationship was further supported by the 1900 Federal Census in St Paul where he was listed as the grandson of Lizette A Sweet and his parents Doris H and Elmer H Brown were listed as Lizette’s daughter and son in law respectively. Hjalmar (Elmer) appeared in the 1895 Minnesota State Census where he was living in the household of Christian Brown and Mrs. Christian Brown in St Paul, Ramsey, Minnesota; he appeared in the same location as Caroline’s son in 1900. These documents proved that the most recent common ancestors of Match 1 and Henry Roth’s granddaughter are Christian Brown and Caroline Larsen.

Match 2 Line of Descent: Match 2’s Ancestry tree identified their mother as Joyce Louise Aletha Brown. Joyce’s birth record in Minnesota stated that her parents were Robert E and Rose Brown. Robert died in Minnesota and his death certificate named Rose (Beck) Brown as his wife and Christian Brown and Carolyn Larson as his parents. This claim was further supported by the 1895 Minnesota State Census where he was living in the household of Christian Brown and Mrs. Christian Brown in St Paul, Ramsey, Minnesota; he appeared in the same location as Caroline’s son in 1900.

Match 3 Line of Descent: Match 3 was the child of Homer L Brown. That information was proven by their mother’s obituary which listed Match 3 as a child and named Homer as the deceased’s husband. Homer appeared in the 1930 and 1940 Federal Censuses in St Paul, Ramsey, Minnesota as the son of Walter Brown. Walter’s birth certificate stated that his parents were Christian and Caroline Braun. This fact was further supported by 1895 Minnesota State Census where he appeared in the household of Christian Brown and Mrs. Christian Brown in St Paul, Ramsey, Minnesota; he appeared in the same location as Caroline’s son in 1900.

Even though Henry Roth’s birth record stated that his mother was Kathryn F. Koontz, DNA and documentation proved that his birth certificate was incorrect. As suggested by family tradition and other documents, Mamie Brown was indeed Henry’s biological mother. The test taker had clear genetic connections to each of Mamie’s three brothers, which would be impossible if her grandfather Henry was not their biological nephew and the son of Mamie.

More research needs to be conducted on the Brown family but was outside the scope of this project.

Our experienced DNA researchers at Lineages are ready to help you with your DNA questions.

Have you had to do any parent child genealogy work?  Let us know in a comment below!