Tips and Tricks for Finding a Revolutionary War Ancestor Part 2 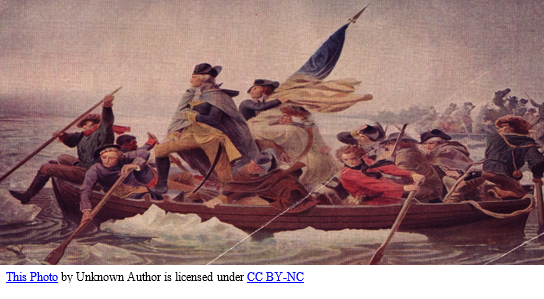 There are two categories of records for patriots who served in the Revolutionary War. Namely: service records related to the soldier’s service in the war and benefit records related to benefits the soldier received because of his service in the war (i.e., pensions or bounty land). Part 1 of this blog focused on service records and Part 2 focuses on benefit records.

Pensions may contain a wealth of genealogical information about your ancestor.  Such as: his residence at the time he filed for a pension, his birth place, birth date or his age, details about his service that typically included when and where he joined or was discharged, details regarding his day-to-day life during his service, widow’s pensions including proof of marriage, and occasionally his children’s names.

Revolutionary War pensions were first offered in 1776 to encourage men to join the cause, and were awarded on both the Federal and State level. Federal pensions were awarded based on a statute passed by the Continental Congress or by a private act of Congress awarded to someone ineligible by statute who petitioned Congress for relief due to special circumstances. The Continental Congress did not have the power to raise funds to pay the pensions, so the states were asked to fund them.[1] Therefore, your ancestor’s pension record may be found in state records instead of federal records.  Also, since an applicant was required to appear at their local court to apply, their records will be in the county and the state they lived in when they applied.

Between 1776 and 1878 Congress passed eighteen resolutions that changed the eligibility requirements for someone to receive a pension due to service in the Revolutionary War.[2] For example: In 1776 pensions were only awarded to disabled veterans who received their disability during their service and in 1780 that law was extended to include widows and orphans to receive a pension for a certain period of time. An 1818 resolution granted pensions for service not related to a disability, so many people applied, which resulted in financial concerns. As a result, an 1820 resolution was passed making pensions only available to those in financial need. Applicants had to submit a certified statement of their estate and income and those who were not in financial need lost their pension. This reduced those receiving a pension by thousands. In 1832, the most liberal of service pension acts provided for every officer or enlisted man who served at least two years to be eligible for a pension of full pay for life. By 1878, widows were awarded pensions if their husband served as little as 14 days or was in any engagement. For full specific details of all resolutions see the time line at the bottom of the description of the database tiled, “Revolutionary War Pensions” on Fold3. Click here to access it.

The two clippings below from Fold3 explain about Bounty Land.[3] 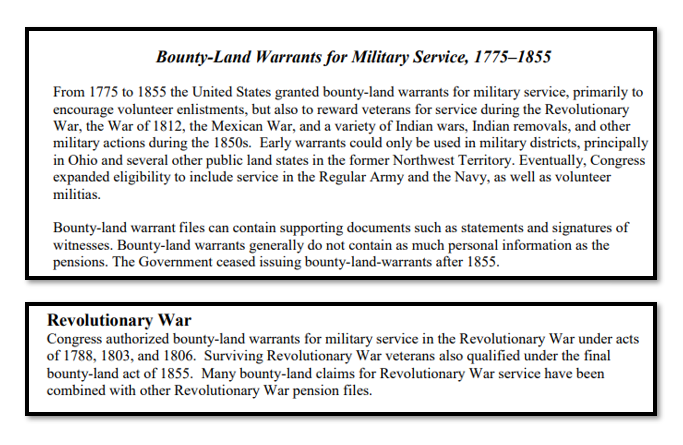 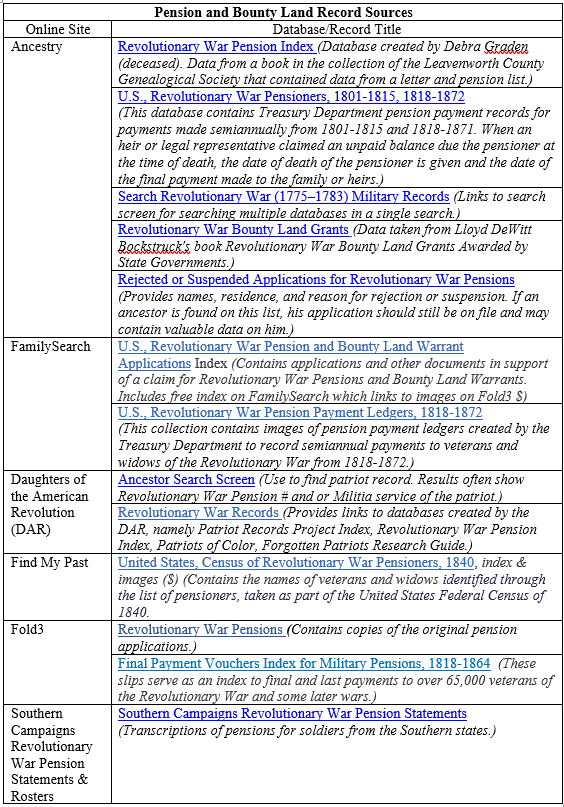 Using the titles in the table above titled, “Some Online Sources of Revolutionary War Pension and Bounty Land Records” a few documents were found and are shown below:[5]

Armed with the name of his troop, research turned to Fold3 where his pension application was

found. Below are a few pages from William’s pension application.[6] 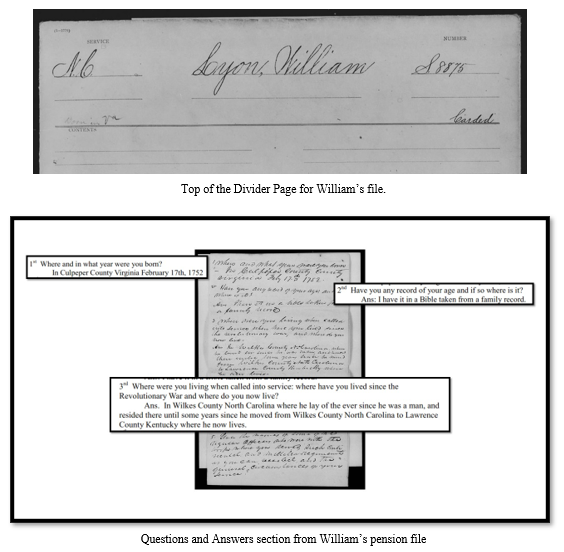 This page is of great importance because it gives William’s birth information and it details his migration. 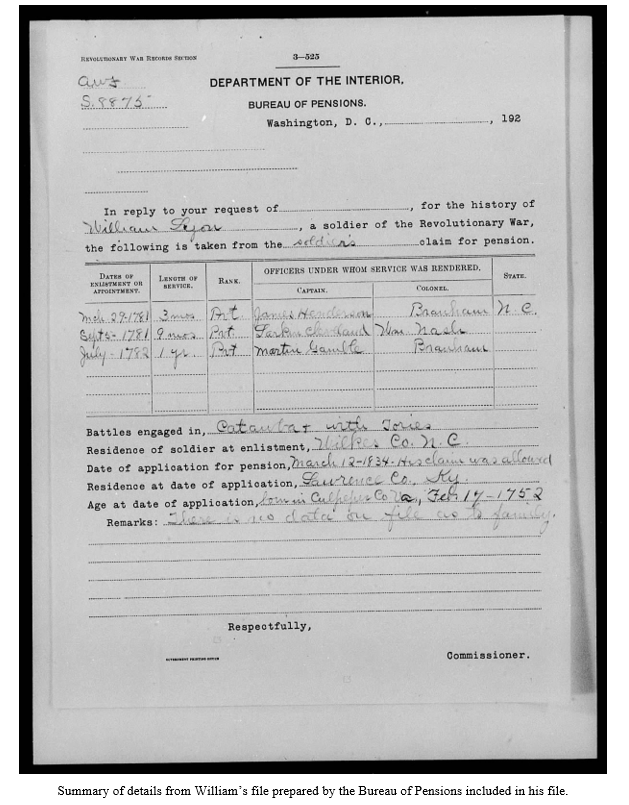 This page is important because it details interesting facts about William’s service.

The ledger below shows that William’s file was transferred to Ohio in September of 1844. While the transfer could be due to the veteran moving, it might also be due to changes in jurisdiction. Cincinnati borders Kentucky on the Ohio River and the fact that William is buried in Lawrence County, Kentucky suggests he died there, which supports this being a jurisdictional change.[7] [8] 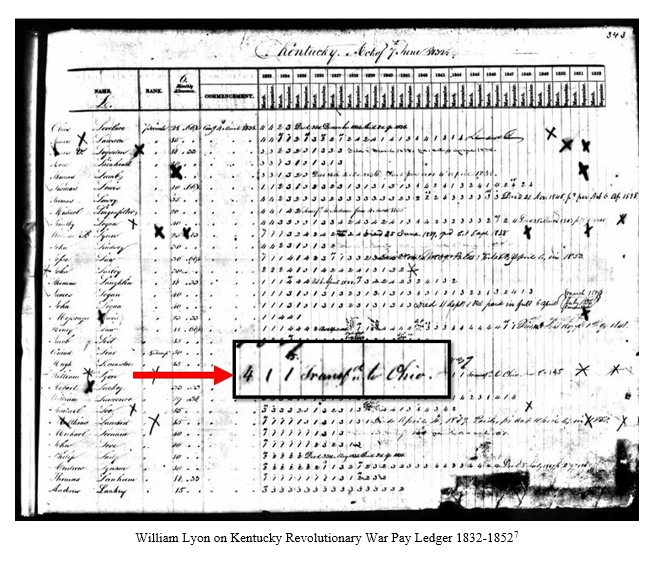 The annotation on the Ohio pay ledger above led to finding a final payment voucher[9] verifying his death date and it is shown below: 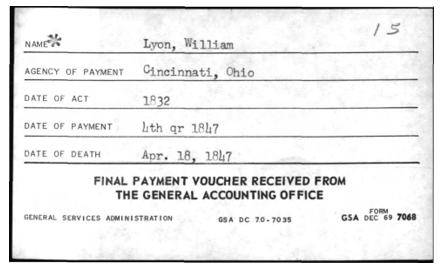