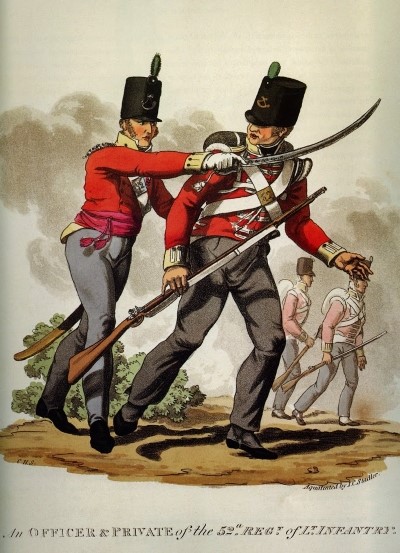 Even if your ancestor did not leave a personal journal of his experiences, a history of his army regiment will give a good idea of the places he served and the battles he fought. Once you have located your ancestor in British Army Service records, you will know the name of his regiment or battalion. This information can tell you the movements of the military unit and identify specific theaters of service. His service number will also be recorded, and can guide you to other useful records.

It can be confusing to see so many different names of military units. The British Army was organized into groups, and those groups were combined into larger groups. The smallest unit of the British Army was the section, consisting of 7-12 men. A group of sections made up a platoon (25-50 men), and a company was two or more platoons (100-150 men). Battalions or regiments were comprised of three or more companies, brigades were three or more battalions, a division was three or more brigades, and a corps was three or more divisions.[1] The actual structure could change slightly, depending on whether the army was at war or in times of peace. Most of the British Army records are sorted into Regiments and Battalions, which you can include in your search.

If your British Army ancestor was not recorded in the Pensioner’s Index, it is possible that he was a casualty of war. A search of the casualty databases on Find My Past may provide more details about your ancestor’s service and how his service came to an end. “British Army Casualty Lists 1939-1945” include names of soldiers who fought in World War II. Earlier conflicts, such as the Crimean War, the Boer Wars, the Indian Mutiny, and the War of 1812 have their own casualty databases, which include more detail about the end of a soldier’s service. For example, Peter Stewart, a native of Lanarkshire and a Sergeant with the Bengal Artillery, died on 11 May 1857 in Delhi, “defending the magazine of Delhi for more than four hours against large numbers of rebels and mutineers.”[2] The casualty databases are compiled from war memorials, newspapers, medal rolls, individual graves, and other sources. These databases do not include information about every casualty, but information is continually being added to the databases.

Another helpful source for British Army records is the “British Army Worldwide Index.” British soldiers who were not enumerated on the England or Scotland census may have been overseas with their regiment at that time. The Worldwide Index is an excellent census substitute for members of the military. Search for the soldier by name and regiment to see where he was serving at the time of the census. Knowing where your ancestor served can also help to identify the conflicts your ancestor may have engaged in during his tenure. If he was in Afghanistan in 1841, he was likely fighting in the First Afghan War that took place between 1839 and 1842.

Commendations were awarded for acts of bravery, but there were also campaign or war medals awarded to members of the armed services and eligible civilians for taking part in a campaign, or for service in time of war. These recognitions were often medals and clasps attached to a ribbon that was specific to the military campaign. Ancestry’s “UK, Military Campaign Medal & Award Rolls, 1793-1949” has lists of the thousands of medals awarded to British Army soldiers. The medal itself was awarded for the main campaign, and different clasps were attached to the ribbon for specific battles. 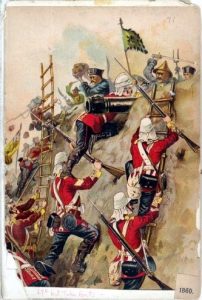 The British Worldwide Index 1861 shows John Hopgood, a private with the 2nd Battalion, 60th Regiment of Foot was stationed in China in 1861.[5] A similar search of the 1871 Worldwide Index showed he was stationed in Peshawar, India at that time.[6] His statement of service on his attestation record shows he was at the “taking of Pekin” in China in 1860 and was awarded the China campaign medal and a clasp for the battle at Peking.[7]

British Army records can be a valuable source for genealogical information. These articles covered military records up to the 1860s, which is only a fraction of the vast number of documents available for searching. The British Army Service Records include millions of records up to 1939, and other databases can be searched for World War II records. If you know your ancestor served in the British Army, the professionals at Price Genealogy can help you learn more about his life and service!