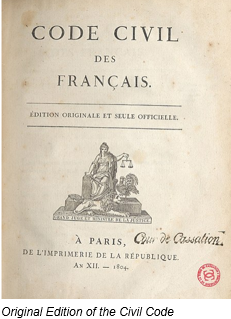 The Napoleonic Code was implemented in 1804, shortly after the French Revolution. This law code replaced the patchy feudal laws that had governed France during the Ancien Régime, or the old regime of monarchs. The Napoleonic Code, or the Code civil des Français encompassed all facets of the law, from criminal to civil. Civil registration of births, marriages, and deaths had begun in France in 1792 upon the dawn of the French Revolution, but was legally codified in 1804 under the Napoleonic Code. During the Revolution, established religion was largely decried and disenfranchised, so civil registration emerged to replace the recording of life events that was historically the responsibility of the Catholic Church. Indeed, under the Napoleonic Code, marriage was viewed solely as a civil contract.

As France expanded its imperial rule across much of Europe during the Napoleonic Wars (1803-1815), French officials 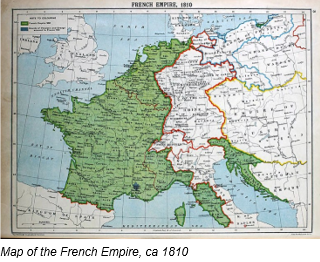 implemented French civil law and code into its occupied territories. The Napoleonic Code was adopted by regions of Italy, regions of Germany, the Netherlands, Belgium, Poland, Spain, and Portugal, along with those nation’s respective colonial holdings. Thus, all of these regions adopted Napoleonic forms of civil registration for births, marriages, and deaths. These forms were rife with details about these important life events, and have largely survived. In many instances, the government kept recording civil registration even after the end of French rule, so civil registration records persist throughout the nineteenth century and even into the twentieth century for many regions. Thus, they can provide a rich genealogical resource in documenting the lives of your French, Italian, German, Dutch, Belgian, Polish, Spanish, Portuguese, and Latin American ancestors.

All forms of civil registration, whether that be birth, marriage or death, were to be recorded before the local civil register within several days of the event. The code specified who the informant should be- it varied by registration type. For the most part, civil registration was recorded on pre-printed forms, though in some regions the entire record was handwritten. However, the form and the handwritten records contain virtually the same information. The forms were then organized by type (birth, marriage, or death) and by year, and bound into volumes. These volumes are (for the most part) indexed alphabetically by surname.  Duplicate forms and volumes were made: one was kept in the local town or village, while the other was sent to the jurisdictional court. The jurisdictional court can be found on the FamilySearch Wiki for a region.

The Napoleonic Code required that births be registered within three days of the birth, and that the child be presented to the civil officer. The birth of the child was to be reported by the child’s father, or in the case of illegitimacy or absence of the father, by the doctor or midwife who attended to the birth. Information required to be included on the birth record included: 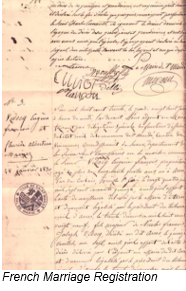 Under the Napoleonic civil code, it was required that the intention of a couple to marry be published twice, with an interval of eight days between them, by the civil officer. This was meant to replace the publishing of the banns. The publication included the first and last names of those to be married, their professions, and residences, along with the names, professions, and residences of the couple’s parents. The publication was to be posted on the civil office for at least eight days.

The deceased were not allowed to be buried until their death had been registered before the civil officer. Death registration was drafted by the officer upon the word of two witnesses reporting the death. If possible, these two witnesses were to be the two nearest relations or neighbors of the deceased. Information included on the death record include:

Lineages’ professional researchers are very skilled in using and understanding these records. We can read them in their various languages. We are happy to assist you discover your ancestors!

Have you ever done any genealogy work with the Napoleonic Code?  Let us know in a comment below!