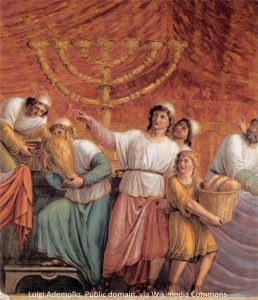 Happy Hanukkah! The eight-day Hanukkah celebration in 2022 begins on December 18th and ends on December 26th. Hanukkah has been observed since 164 BC. We’d like to share some interesting history and facts with you about Hanukkah, also known as the Festival of Lights!

In about 200 BC, Judea was under control of the Seleucid Empire, along with parts of Persia, Syria, and Asia Minor. Leaders of the empire were culturally Greek—they favored Greek traditions, customs, and language while simply tolerating other cultures, such as Judaism. After the death of King Antiochus III, his son, Antiochus IV rose to power and began to openly persecute the Jews. He made the religious practice of Judaism illegal, demanding instead that the Jews worship Greek deities. The Seleucid army entered Jerusalem in 168 BC and massacred thousands of Jews in the city. The army entered the temple there (known as the Second Temple). They erected a statue of Zeus within the walls of the temple, ransacked the golden religious symbols, and offered sacrifices of pigs as an especially offensive affront to the Jews who remained in the city to witness it.[1]

The Jewish Priest Mattathias and his five sons bolted to the mountains to escape persecution, and to develop a plan to retake their city and reclaim their temple. The family, known as the Maccabees, led a rebellion against Antiochus IV in 167 BC. They engaged in guerilla warfare against the Seleucid officials in the more remote, outlying areas of Judea. Judah Maccabee, the son of Mattathias, was successful in recruiting other persecuted groups under Seleucid control, and within four years he had developed a well-trained, disciplined army. They were victorious in several battles, and finally succeeded in recapturing Jerusalem in 164 BC.[2]

The first order of business was to cleanse the temple, rebuild the altar, and relight the temple menorah. Once lighted, the seven branches of the menorah were to be kept burning every night, but the battle for Jerusalem left almost no fresh olive oil to be consecrated for this purpose. Only one small container of pure olive oil was found, and it was barely enough to light the menorah for even one night. Miraculously, Judah Maccabee and other Jews witnessed the oil lasting for eight days, long enough to procure more untainted oil for the purpose of keeping the menorah burning. A yearly eight-day festival was proclaimed to commemorate the miracle, and today the celebration is known as Hanukkah, the Festival of Lights.[3]

Symbols and Traditions of Hanukkah 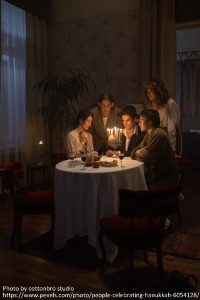 The menorah is the symbol of Hanukkah, but as the history shows, the menorah did not originate with Hanukkah. Menorahs were used in ancient temples for centuries before the Maccabean Revolt. The traditional temple menorah had seven branches for seven lights and was kept burning from sundown until dawn. Only fresh, consecrated olive oil was used to light the menorah. Each branch of the menorah had a small well for the oil. The Hanukkah menorah differs from the temple menorah in the number of branches. The seven-branched menorah was never used outside of the temple. The Hanukkah menorah has nine branches, eight to represent the eight days of Hanukkah, while the ninth (center) branch is used to light the others. In modern times, candles or even light bulbs are used to light the Hanukkah menorah.[4] On each night of Hanukkah, a candle is lit at sundown and blessings are recited. The menorah is often placed in a prominent spot near a window as a reminder of the Hanukkah miracle.

The dreidel is a spinning top, and part of a Hanukkah game played by children and families. The four-sided dreidel has one Hebrew letter on each side: Nes, Gadol, Hayah, and Sham. Players place a token (chocolate coin, penny, or some other small object) in the “pot,” then take turns spinning the top. The four sides represent “all,” “half,” “nothing,” and “put in.” If the “all” side comes up, the player takes all of the tokens in the pot. If the “half” side comes up, he takes half of the tokens in the pot. If “nothing” comes up, he does nothing, and if “put in” comes up, he adds three more tokens to the pot. [5] 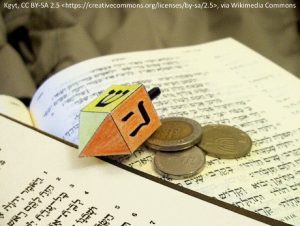 The traditional tokens used for playing dreidel are chocolate coins wrapped in gold foil, also known as Hanukkah Gelt. This treat was often given as gifts to children during the celebration. In more recent times, nightly Hanukkah gifts are likely to be cash for older children, and toys for the younger ones. Other treats are foods fried in oil which are served during Hanukkah. These include potato latke, which are grated potatoes mixed with egg, onions, and breadcrumbs or matzo meal. The potato mixture is shaped into flat patties and fried in butter until they are crispy on the outside, but still tender on the inside. They are traditionally served with sour cream or applesauce. Another Hanukkah treat is a jelly doughnut. These treats are made from bread dough fried in oil, with jelly or custard in the middle, and sprinkled with powdered sugar. [6]

Hanukkah is a wonderful tradition, celebrating Jewish history, miracles, and light in countries all over the world. If you have Jewish heritage, our expert researchers at Lineages can help you explore your ancestry!