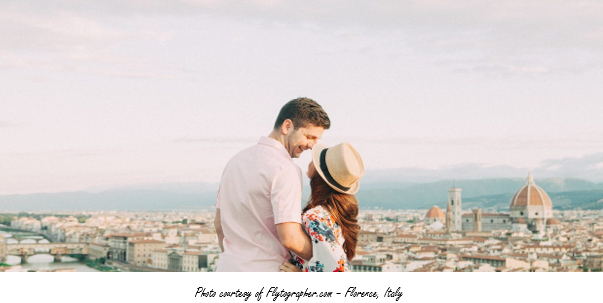 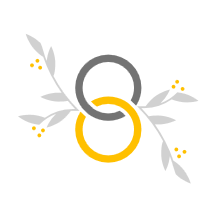 Traditional Italian weddings take years to plan and prepare for as it is customary for the couple to not only prepare for the wedding ceremony and reception, but in addition, purchase their home and furnish it before the wedding date.  Weddings range in size from small to large, but in Italy, the tradition is to invite everyone!  Immediate family, all extended family, friends, business acquaintances, dignitaries, religious connections and leaders – everyone.  This is not a small investment, and the couple and their families devote years to fully prepare and pay for this event.

Italian weddings are not held on Fridays as it is believed that evil spirits are created on that day and it may bring you bad luck.  Having good luck for your wedding is a serious matter, so the bride will make a small tear in her wedding veil and groom will carry an iron token in his pocket for months ahead of the day to bring extra luck.  Rice is showered on the bride and groom as they leave to promote good spirits in their home and fertility for the couple.  The wedding favors are typically sweet almond candies in a little bag with exactly five or seven pieces of paper streamers inside.  Those specific numbers signify good luck!

How to Research Italian Marriage Records:

When doing Italian research, we oftentimes need a great deal of luck as well.  Many villages are not yet available to search online at the Antenati.San.Beneculturali.it website or the FamilySearch.org website.  At times there are significant holes or missing groups of years, even when records are published and available to search.  Having lived through several wars, Italian parishes have lost records in fires, floods and even earthquakes.

When we are lucky and we find records open to search, we often begin by looking for the birth records and death records of our ancestors which will help us either discover who the parents were, or verify we have the correct parents in our personal records. 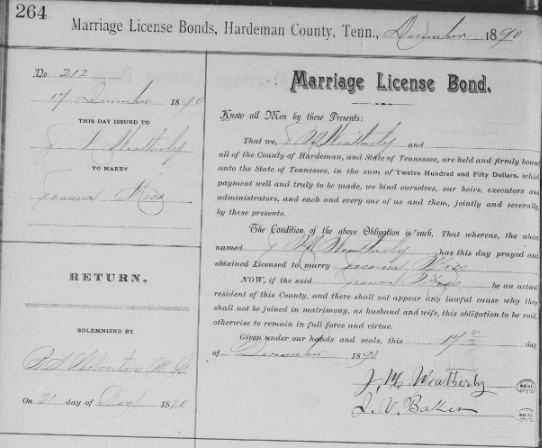 This Marriage Bond was created 17 Dec 1890 and the marriage was solemnized on 21 Dec 1890.  It gives the names of the bride and groom, JM Weatherly and Joanna Moss, and that they both resided in Hardeman County, Tennessee.  No parents, no city of birth information, or even the city they are currently living in is given  – only the county.  Not even a full name for the groom is provided, which has caused significant issues in further verification and research for this pedigree.

In European marriages many more vital facts are usually recorded, and that is enormously useful for those of us researching these records today.  In Italian marriage records, the following important facts are typically unveiled:

This brings 22-28 points of information to light and gained from one single marriage record!

Here is an example of an Italian marriage record [ii] from the village of Marano Marchesato in 1879: 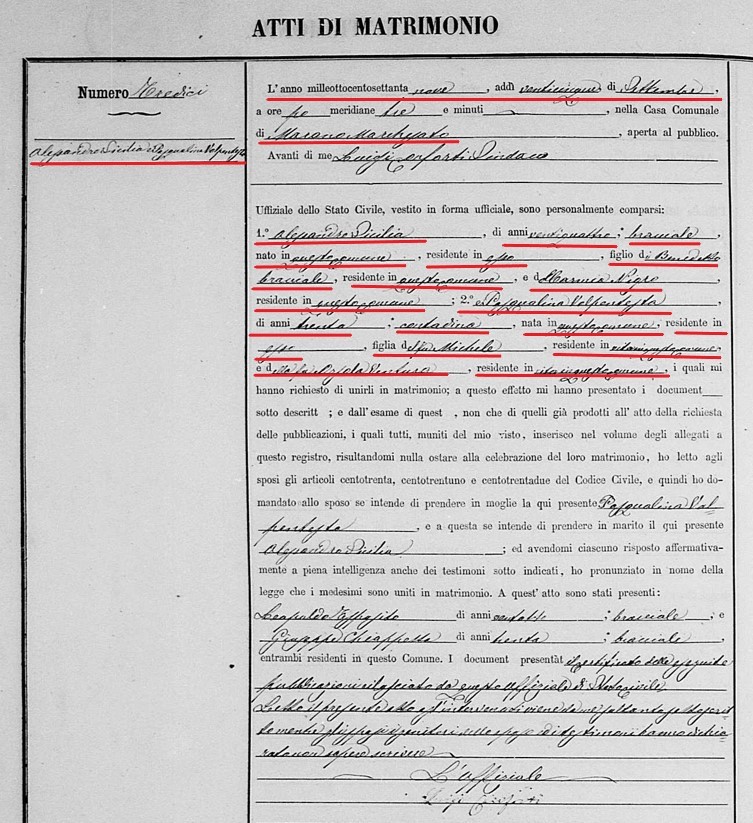 From this document, we uncover the following vital information:

In some areas of Italy, particularly in the southern regions, additional information may be included.  These marriage records will be five to twelve separate pages in length, rather than one universal form filled out as seen above.

Those additional documents will provide secondary evidence of the parents’ names of both the bride and groom, and give new information – the death information of the father of the bride – Vincenzo Melia, married to Angela, died 28 September 1820:

This Sicilian Marriage Act also included a bonus document – the Marriage Act of these parents of the bride – Vincenzo Melia and Angela Morreale.  The document helped us discover important new facts – the paternal and maternal grandparents’ names of the bride, and the marriage date:

This is why one should actively seek after Italian Marriage Records – they provide so many valuable gems in their pages!

In modern Italy, a great deal of time and focus often revolves around the ceremony and the reception preparations, including their wonderful superstitions, however, Italians are careful to include all proper documentation establishing the bride and groom are free to marry.  Public notices are posted in their home villages, either on the city office doors or on the local church doors to give everyone in the village an opportunity to bring any reason forward that they cannot wed.  The couple must register an Intention to Marry in the city office and then the city will publish two notifications that need to be visible for eight days, which must include two Sundays. The city will then provide a certificate attesting that the publication is complete and there are no impediments to the marriage.  Typically, the couple will happily marry within a week of that certificate date.

These important Italian marriage records provide invaluable information that could open up several generations of data which will assist you in enlarging your Italian family pedigree.  Buona fortuna!