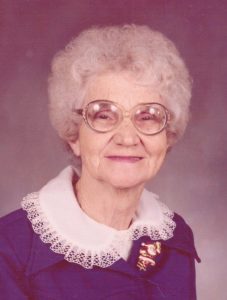 have stories to tell about them and stories learned from them. I love the stories my grandmother told about her mother and even her mother-in-law. Her mother was a gentle woman who carefully taught her husband to read, using the Bible as a guide, so that he could take a test and become a boss at the coal mines. The stories of her mother-in-law were more amusing, though. She was an immigrant in the late 1800s who was as tough as nails to her daughter-in-law, sometimes chasing her with a chair, but gentle as a kitten to her grandchildren. Grandma told of the time the

“kids” (including my Dad) were downstairs and asked their grandmother to lower one of their favorite but heavier toys by rope down to them. She did, but it broke loose, hitting the boys in the head. She was so mad at that toy that she came screaming down the stairs and gave it a thorough tongue lashing “sailor swearing” style.  We love the endearing stories of our mothers, grandmothers and beyond.

But what if you don’t have stories of even your own mothers? Or what about the great + grandmothers for whom we know nothing because we don’t even know their maiden names? How do we learn about them? This blog will address some ways to learn about them.

In addition to a search for other pedigrees online, try a general search for your mother and grandmothers in FamilySearch.org Records or in Ancestry.com because you may be surprised by an obscure record which will appear. For example, you may not know that Ancestry.com has indexed many school yearbooks.  Yearbook entries for both of my parents were found there. A google search for both your ancestors’ names or the place where they lived is often fruitful as little-known entries may appear.

Search for your mother and grandmothers on the census, both as adults and as children. Much can be learned about them just by knowing where they lived and the type of occupation their father or husband had. Now there is even the 1950 census which may be checked.  The censuses are available and indexed through FamilySearch.org and Ancestry.com. American Indian census rolls and Indian schedules are also available through FamilySearch.org and Ancestry.com.

It may surprise you to know that many newspapers date fairly early in the history of a county. Of course, obituaries should be sought, but also look for your mother and grandmothers by maiden name. There may be a marriage announcement or some school achievement.  For example, there was a photo and a paragraph quoted by my mother included in the Chicago Tribune in 1950 when several employees were being interviewed at the beginning of Spring. 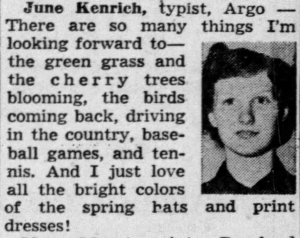 This was found just by doing a general search of my mother’s name at Newspapers.com. Another excellent pay website is Genealogybank.com.  Both of these are free to use at your local Family History Center.  Chronicling America is a good website for learning if a newspaper existed for your county and it is a free website. I have also often just called the county library in the area where my ancestor died and asked for an obituary search. The cost is either free or minimal.

But what if you don’t know a maiden name of a great-grandmother? The following are a few ideas for finding that elusive name.