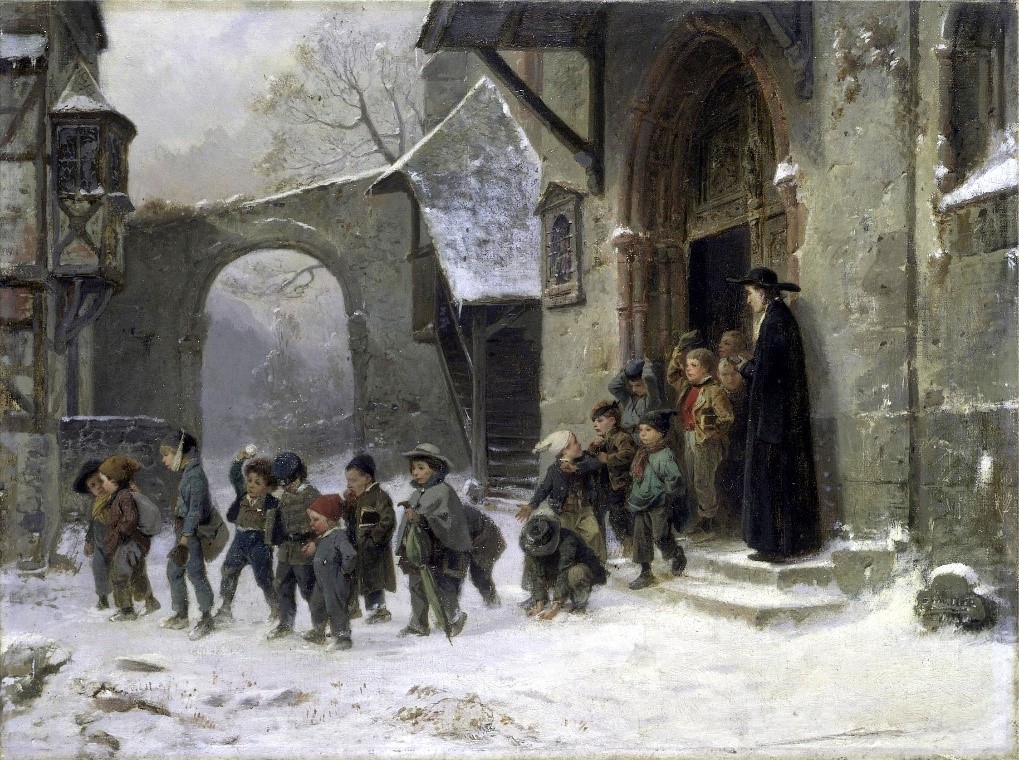 It’s back-to-school time across many parts of the world. Students of all ages are heading back to the classroom to resume their studies for another year. This annual ritual generates quite a few records, as it has for several generations. School records are an excellent source of information for genealogical research, and there are many United Kingdom school records waiting to be discovered.

History of Education in Britain

The earliest schools in the British Isles were based in Christianity. Early Christian missionaries arrived in England in about 600 A.D., intent on teaching Latin, introducing scriptures, and preparing young men to eventually prepare for service in the clergy. [1]

After the Norman conquest of 1066, new ideas of science, humanities, and philosophical thought made their way to the British Isles, and education developed beyond just religious study. Universities arose, such as Oxford (ca. 1096) and Cambridge (ca. 1209), independent of any church or cathedral. Most of these University scholars were from affluent families who could afford to send their male children away for their education. [2]

The common folk, who made up the majority of the population, gained their education through work, apprenticeship, and plenty of life experience. There were few people who could write their own names, and even fewer people could read. Between the 16th and the early 19th centuries, children were often indentured as apprentices. Their “education” consisted of learning a trade—often living away from home—so they could support themselves and a family once they reached adulthood. There was not much need to learn to write, other than signing one’s name, but learning to read was encouraged so children could study the Bible.

From Sunday Schools to Compulsory Education

Since children worked six days per week, “Sunday Schools” were established. Not to be confused with today’s Sunday Schools of religious instruction, these schools taught children basic skills in reading and math. Children would attend for two hours on Sunday morning, go home for a break at mealtime, then return for more study in the afternoon. Robert Raikes of Gloucester was one of the pioneers of Sunday Schools, although they were controversial at the time. Some felt the secular nature of the schools caused the teachers and children to break the Sabbath; others dismissed them as “ragged schools” for the poor. Despite the early criticism, Sunday Schools grew in acceptance and popularity for the next few decades. [3]

The 19th century saw tremendous changes in education in the United Kingdom. An increase in literacy led to the establishment of schools based on religious background, geographic needs, and social reforms. Children who worked in the coal mines of Wales or the factories of Lancashire were required to be educated for two hours per day in local schools. Catholic communities were allowed to organize their own schools, hire their own teachers, and receive financial support from the government. Reform schools were built to rehabilitate juvenile offenders and teach them a trade. Military schools were organized for training army cadets, and later, the children or orphans of military members serving overseas. [4]

By 1880, the government had taken ownership of the schooling of Britain’s children, and education became compulsory. Children from ages 5 to 10 were required to attend school, and to meet certain standard levels in reading, writing, and arithmetic in order to progress in their education. Over the next eighty years, the age limit for education increased until 18 became the maximum age for students in the school system. [5]

School records can be a great resource for genealogical research. Schools carefully recorded details about the students who were enrolled, often including their parents’ names, where the students were born, and how old they were. These records might also include other interesting details, such as disciplinary actions, transfers to other schools, or graduation dates. School records are found in various repositories, including the National Archives UK, the London Metropolitan Archives, and several online websites, such as FamilySearch, Find My Past, and Ancestry.

How can you use these records in your research? School records can fill in gaps in the standard resources, such as the census. If you have an ancestor who is missing from the family household as a teen, it would be worth checking the local school records to see if he was listed as a student in a boarding school, or as an “inmate” in a reform school.

Was your ancestor a professional craftsman, minister, or physician? University records might provide a date of birth, names of parents, the field of study, and the years of matriculation. You might also find information about the life events of alumni, including marriages, career moves, and death notices. Ancestry has records of students enrolled at Cambridge, Oxford, and London Universities.

School records can be a valuable resource where records no longer exist. For example, the Alumni Dublinenses of Ireland lists thousands of names of students studying at Trinity College Dublin between 1596 and 1846. Early school records can place your ancestor in a specific region. The Ireland National School Registers is a database of school records for younger children in various parts of Ireland between 1860 and 1915. Both data sets can be found on Find My Past and are most useful because so many historical records of Ireland have been lost.

Every locality had their own school system. A search of the FamilySearch Catalog for the parish or county name will often yield a subset of records under “Schools,” which gives a more localized set of educational records for searching.

UK school records can provide birth dates, places, years of matriculation, names of parents, and other valuable clues about your ancestor. Don’t overlook these resources when exploring your family history!

The researchers with Lineages can assist you in your search for your ancestor’s school records.

[2] Lawson and Silver, Social History of Education in England, 11.