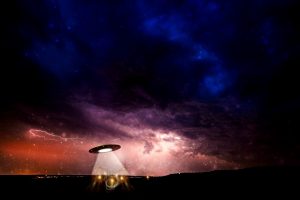 For the non-genealogically inclined, the mention of United States government alien registration records may conjure up images from the Men in Black movies and the hit 1990s X-Files television series. However, the topic of this post is not so extraterrestrial. The term “alien” was historically used to describe human immigrants from another country who had not yet become naturalized citizens, but who maintained permanent residence in the United States. Interestingly, the U.S. Citizenship and Immigration Services calls their more recent historical series the A-Files (Alien Files), C-Files (Certificate Files), and other names.

After the relative chaos of so many different “enemy alien registration” efforts by different government offices during WWI, these records from WWII are often a welcome relief in comparison . . . if one can spare the 65 dollars retrieval fee per person assessed by USCIS. During WWII, federal agency registration efforts were centralized and it is much simpler to locate records, assuming the person was actually registered. Alien Registration Forms, often referred to in shorthand as AR-2s, recorded the presence of aliens during World War II. The Immigration and Naturalization Service, also known by the acronym “INS,” used the AR-2 forms to document all non-naturalized foreigners who either lived in or entered the United States from August 1940 through 31 March 1944. Researchers should realize that while these forms are stamped with an A-number, they are an independent record series from the A-Files, which were created after 31 March 1944.

Most of the original AR-2 forms were microfilmed, but were then destroyed because archive space was at a premium. Microfilming was intended to significantly reduce the amount of storage space required by this five and a half million plus document record series. However, if your unnaturalized registrant is not on the films, the most likely reason for the form’s absent is that it was placed in an A-File or even in a C-File with the INS after 30 March 1944. Because of strict security and privacy regulations surrounding alien registration or alien files, access is tightly controlled and must be handled through the U.S. Citizenship and Immigration Services Genealogy Program. The first step is always to do an index search, even if one thinks they have an A-number. The number often seen on passenger manifests and even naturalization records from the Federal courts (for naturalizations from 1906), might not actually be for an INS document number. Another reason to do an index search is to alert you to other records that the INS has on file which you may not know exist. See the following link to the search page: https://genealogy.uscis.dhs.gov/#/search. 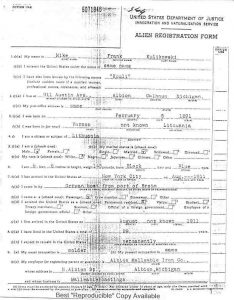 The AR-2 forms had fourteen questions each registrant had to answer. These questions asked what names they used when they came to the United States and any other names they went by up to that point. The indexes cross reference up to three different names a person may have used. The form also asked for their current place of residence, exact birth date, and exact birthplace. Immigrants were asked when they first came to the United States, the arrival port, ship’s name, arrival date, and even their passenger status. For some immigrants, this may be the only extant record indicating when and where they entered the United States, especially for overland immigrants coming from Canada and Mexico.

You may not expect an exact employer address, but this could be very helpful if the employment records still exist. Each registrant was required to list all organizations, clubs, or societies within the last five years with which they affiliated. Many organizations kept records of their members. Questions about prior military service in their former homelands, or criminal information, can also provide clues and leads. Finally, the registrants indicated if they ever submitted their intention to naturalize papers in any court. In short, the AR-2 form may be loaded with clues for additional research on your immigrant ancestor.

Even if a person didn’t become a citizen after arriving in the United States, this doesn’t mean there will be no valuable clues concerning their exact origin. If passenger lists, military draft registration, newspapers, and vital records of themselves and their children fail to reveal the exact place they came from in the old country, these U.S. Alien Registration records may provide answers. Alien Registration records are not just to find out when and where a given immigrant was born, and when or how they came to the United States, but they can provide biographical information and pictures that may otherwise be forgotten.

If you need help finding your ancestors before they came to the United States, Lineages has a team of experts who are more than happy to apply their expertise to your brick wall immigrant ancestor. After the brick wall comes down, our team can continue your research in foreign lands.